You are here: Home / News / In Torchiara the Great Ball of the Sirens at the Bourbon Court

For the first time in Cilento, Torchiara, the Italian Dance Theater Company

Students and professional artists of historical dance will come from all over Italy for the first time in Cilento, to dance at the baronial palace of Torchiara, from the 16th century in the nineteenth-century Hall of mirrors now destined to music and where concerts of classical music of great excellence.
From an idea of ​​Angela Riccio and Antonio Palazzi, promoter and director of the initiative the teacher Livia Ghizzoni, director of the Italian Theater Danza Company, in collaboration with the Municipality of Torchiara, the Historic Residence Borgo Riccio and the cultural association Ergo South. It will be the occasion to attend one of the most fascinating performances of the Italian dance scene: the dance of the manuals of the ‘good society’ of the mid-nineteenth century. Not only. You will also be able to admire the elegant original and restored period dresses (1810 and 1860) and original French, Scottish, English and Russian choreography from the nineteenth-century dance manuals kept in some Italian and French libraries.
Two moments of spectacle offered to the public free of charge: Friday afternoon in the extraordinary setting of the temples of Paestum, followed by the actual show of the “Grand Ball of the Sirens – at the Bourbon court” on Saturday night at 9 pm in Torchiara.
The Grand Ball of the Sirens is a spectacle of rare elegance, during which dances will be performed whose choreographies are taken from the manuals of nineteenth-century dance masters on music by Strauss, Verdi, Rossini, Pachelbel. The ladies will wear sumptuous dance dresses, according to a very rigid dress code at the time: silks, laces, taffeta, brocades that cover rigid bodices and imposing crinolines while the riders will all wear the tailcoat. Spectators will be able to admire the codes that governed the great court dances, codes that include kindness and refinement in posing, elegance and bearing, ‘messages’ sent and received with the games of fans and the precision of the steps in complicated choreographies like those of the quadrilles French and English and wild Hungarian polkas.
Livia Ghizzoni is one of the protagonists on the national scene: she grew up under the exceptional leadership of great classical teachers such as Nina Soldun, Vadim Desnitsky, Ekaterina Desniskaya, Bella Rachinskaya, Irina Chistiakova, Marina Vasilieva of the St. Petersburg Academy and then continue his training in Milan with Silvia Brioschi, at the Académie de danse classique Princesse de Monaco and in the Victor Ullate Ballet of Madrid.
His company has participated in numerous festivals in Italy and abroad as well as creating lavish events in historic Italian palaces (Genoa, Bologna, Rome, Milan, Turin, Parma) and abroad (Nice, St. Petersburg). Annually the Verdiano Festival of Busseto and the Verona Arena Festival with a Grand Ball.
“The dance unites -says Livia Ghizzoni-and I with the nineteenth-century dance I create synergy between people from different backgrounds with different dance settings. I hope that even here in Cilento-Ghizzoni concludes- you can create creative collaborations of different schools, overcoming the closures for a common experiential enrichment “.
“This event is a further cultural enrichment for the Cilentan territory – affirms Angela Riccio – that I would like more and more attractive for the artists in their different expressions. In this direction I have been moving for years and this is my commitment to enhance this wonderful land”. 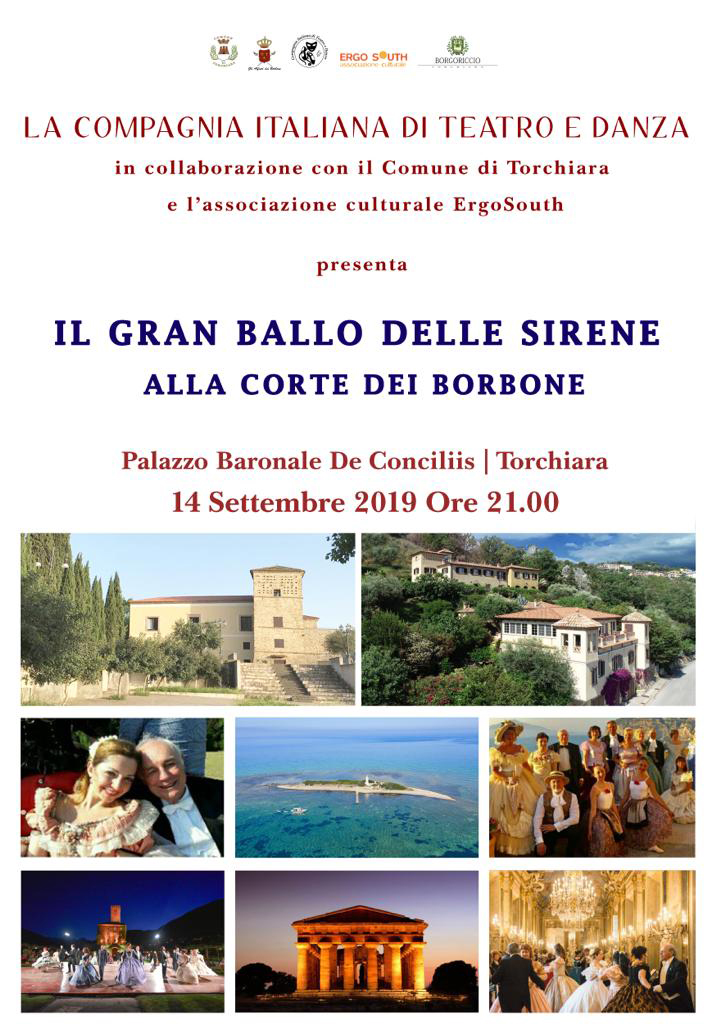